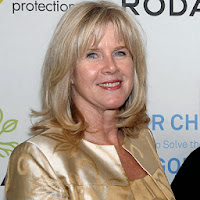 Mary Elizabeth “Tipper” Gore (née Aitcheson) is the former second lady of the United States, and the estranged wife of Al Gore. Her contribution to loon comes through her role in the Parents Music Resource Center, which is devoted to criticizing record covers featuring “profane language”, especially heavy metal and rap. The group was instigated after Tipper observed her daughter listening to “Darling Nikki” by Prince (lyrics about masturbation), and, in an inference process worthy of David Noebel, decided that rock & roll caused teen suicide, murder, Satanism, drug and alcohol use, and worse. Evidential base? Yeah, right. The group became known for their “PARENTAL ADVISORY - EXPLICIT LYRICS” sticker (quickly known as the “Tipper sticker”)

Diagnosis: Promoter of completely crackpot-based moral panic of a kind usually associated with fundie rightwing wingnuts – it's useful to be reminded that there are plenty of such loons elsewhere as well. No one takes her seriously, of course, but she has undeniably wielded some power
Posted by G.D. at 10:43 AM