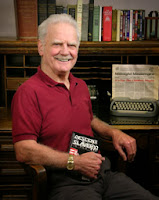 Des Griffin belongs to that group of people who attempt to synthesize all things loon, from Alex Jones to David Barton, one of those people who determinedly take the crazy point of view on absolutely every issue that comes their way. Thus, Griffin is a religious fundamentalist as well as a conspiracy theorist, and central to his output are several books trying to link the government to the New World Order, the Rothshchilds' Illuminati Agenda, as well as Freemasonry and “world banks”, complete with fundamentalist paranoia and hysteria. He also edits the Midnight Messenger Newspaper and writes for Conspiracy Nation.

Griffin seems to be heavily influenced by the writings of the legendary conspiracy theorist William Carr, and believes, essentially, that the Rothschild and Rockefeller families run the world behind the scenes (the “Fourth Reich”). Since these “Satanically-inspired” families control everything anyways, the idea that the US is a democracy is false. Due to his rants on alleged Zionist conspiracies the Anti-Defamation League has judged his writings to be anti-Semitic, a stance that may partially be reflected in Griffin’s defense of David Irving (Griffin’s own rant is here). He is also a 9/11 truther, of course. You can read the introduction to his newsletter here (it avoids random capitalization, at least, but that’s as far as it gets in terms of credibility) to get an impression of how his mind functions. Of course Griffin portrays himself as an ardent seeker of truth and documentation; the idea of psychological biases being a potential challenge during such research, and how such biases may lead to selective use of evidence and double standards, has apparently never occurred to him.

Jack Chick has on occasions relied on Griffin’s research, which lends it a sort of anti-authority.

Diagnosis: Classical madman, and an excellent example of the depth of lunatic conspiracies an otherwise probably intelligent fellow can end up in by failing to know the basic rules of inquiry and use of evidence.
Posted by G.D. at 12:42 PM