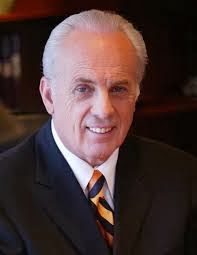 John MacArthur is an insane fundamentalist Baptist, hyper-Calvinist and dispensationalist endtimes preacher, known for leading the Grace Community Church, for his radio program Grace to You, as author of several fundamentalist tracts, and for being on the Council of Reference for the British creationist organization Truth in Science (though he is American), which – as the name implies – is vigorously opposed to both truth and science. Of evolution, e.g. in his book The Battle For the Beginning, MacArthur has said that that Christians “ought to expose such lies for what they are and oppose them vigorously.”

He is also an advocate of Nouthetic Counseling, which stresses the Bible as a sufficient tool for counseling people with mental illnesses such as depression and anxiety. Indeed, MacArthur rejects psychological theories and techniques, considering psychology and psychiatry to b contrary to the Bible. Our Sufficiency in Christ: Three deadly influences that undermine your spiritual life, for instance, rejects psychology, claiming that “[s[uch a thing as a ‘psychological problem’ unrelated to spiritual or physical causes is nonexistent,” and of people who seek out secular mental health professionals that “Scripture hasn't failed them – they've failed Scripture.” To emphasize, he points out that “True psychology [i.e. “the study of the soul”] can be done only by Christians, since only Christians have the resources for understanding and transforming said soul. The secular discipline of psychology is based on godless assumptions and evolutionary foundations and is capable of dealing with people only superficially and only on the temporal level ... Psychology is no more a science than the atheistic evolutionary theory upon which it is based.” His stance has, needless to say, caused some controversy, the most notable of which was the first time an employee of an evangelical church had ever been sued for malpractice. MacArthur has, needless to say, no background in or knowledge of psychology (nor evolution).

Equally needless to say, perhaps, is that MacArthur is not particularly open to theological disagreement. Catholicism, for instance, is “a Satanic religious system that wants to engulf the earth,” and Roman Catholic “priests are broken, shattered, tragic, sad, disconnected people; no past, no present, no future.” He is furthermore offended by the fact that atheists celebrate thanksgiving since he finds it incomprehensible how atheists can be thankful for anything – the fact that they seem to be grateful must thus mean that they really know that God exists, and that makes them not atheists but worshippers of (or at least deluded by) Satan. (He is still offended.)

His stances on politics are pretty much what you’d expect. The fact that people’s sexuality is not controlled by the church down to the most intimate detail is evidence that God has abandoned America (“You know a society has been abandoned by God when it celebrates lesbian sex”). Apparently Obama is also evidence of God’s judgment, and so is the Democratic party (the “party of sin”), because that’s what counts as a political argument to wingnuts such as MacArthur (as so many other wingnut pundits, he is pathologically unable to see that arbitrary and negative attempts to classify political opponents as evil are not quite equivalent to offering a reason for disagreement based on fact, analysis, or argument).

Diagnosis: Belligerent, hateful madman whose lack of aptitude for truth is only matched by his narrow-mindedness. A breathtakingly dense fellow – and a dangerous one, for MacArthur seems to have quite a few followers.
Posted by G.D. at 12:03 PM