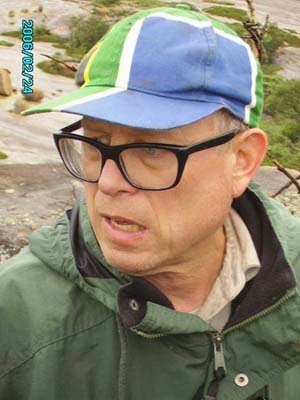 Just as last post’s Ryan McGinty, Kelly McKennon is a promoter of orgone energy; he is just as divorced from anything resembling reality, and – hence – has an equally substantial whale.to presence. And just like McGinty, McKennon – or Laozu, as he prefers to be called – gives you advice on how to escape from threats that don’t exist and fill your surroundings with mythical positive energy through crystals, imagination and junk from Radioshack. “All the trees and plants now on the lot where I live […] have positive ambient qi,” claims Laozu (though it can only be measured by intuition and devices that tells him what he wants to know by no discernible systematicity apart from the fact that he knows what answer he wants to get), and he has developed comprehensive resources that you can use, too (“qi”, by the way, is in Laozu’s opinion just the Chinese word for orgone). Among his most powerful devices is the Laozu Torsion Cloud Buster, which can be placed on a “black energy line” to “convert it to positive”. Looking at his testimonials, at least this guy seems to have been satisfied with the product: “This line passed through the corner of the cellar where two nasty demonic type spirits were in residence […] When the CB was put on the line they changed from being like hissing alley cats into grim silence, and the last time Kelly looked they were crying.”

Laozu can also offer advice on charging water and crystals, Pyramid Crystal Chargers, Orgonite Innovation and how to “gift the heavens” – as well as information about “non-material beings”, entities that can nevertheless be characterized by their qi (or your imagination). “Examples of non-material beings are angels, those which have responsibility for seeing to the welfare of certain geographic locations (spiritus loci) or (tu di shen), those which have responsibility for looking after trees (devas), those whose responsibilities lie in the air (sylphs), those whose responsibilities lie in the water (undines), those who are associate with fire (salamanders) and the elementals which often have responsibility for specific plant (or other) organisms. The qi of the nymphs, sylphs, and devas which I have observed has always been quite positive.” Yes. Sylphs sometimes disguise themselves as clouds, apparently, which makes one wonder whether Laozu has a clear grasp of the distinction between material and non-material.

You can read an account of going vortex safari with Laozu here.

At least he is candid enough to admit that “[m]y findings and opinions are not all mainstream, but I have based them solely on personal observation,” which, of course, close-minded people with critical thinking skills would say is exactly the crux of the problem, especially if you, like Laozu, have already demonstrated a proclivity for affect bias and general lunacy.

Diagnosis: The distinction between reality and imagination is apparently a hard one, and McKennon fails more profoundly than most. Otherwise harmless.
Posted by G.D. at 11:53 AM