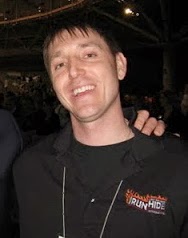 We’ve sort of encountered this character before, but I guess he deserves his own, short entry. Jake McMillan is, or at least was, an associate of Bradlee Dean at the You Can Run But You Cannot Hide International Ministries, and Dean’s partner on the radio show Sons of Liberty – at least until recently, when rumors suggest Dean’s organization seems to have disappeared; that may be an exaggeration, but the suggestion that Dean and McMillan have parted ways may be correct. At least McMillan used his time on the Sons of Liberty show well, and managed to utter such things as the claim that “half the murders in large cities are committed by homosexuals”. He also praised the actions of the African nation of Malawi, which recently began arresting gay couples for getting engaged. “They are very conservative,” said McMillan, and appropriately “sentence people for crimes against nature.” McMillan is, of course, in favor of criminalizing homosexuality, and praise countries implementing such laws (mostly Muslim countries, but he seems to have willfully overlooked that fact) since they accordingly “love and value life and they love and value that which God gave, and so they enforce laws against that which destroys life which again is crimes against nature.”