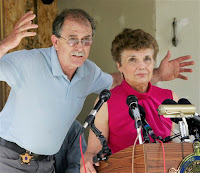 Though Ed and Elaine Brown are clearly loons, they are recognize as criminally insane by more or less all parties, and one may question including them in this Encyclopedia for the very fact that their actions are unlikely to spawn further ills (but then again …). The Browns were tax protesters who bought into the whole gamut of conspiracy and pseudolaw theories (Ed was a pest control retiree like Tom Delay). After being convicted, they holed up in their house (compound) refusing to leave and threatening violent action against law enforcement, which resulted in an eight month costly armed standoff. The whole saga is summed up here.

Ed used to be a militia guy and spokesman for the Constitution Defense Militia. His (self-appointed) responsibility, according a 1994 interview, was to designate various individuals and organizations as being part of a conspiracy to deprive Americans of life and liberty, a relatively easy task for the already unhinged (not being very creative the 1994 list included primarily very predictable choices: Clinton, George H.W. Bush, Gorbachev, The Council on Foreign Relations, the UN, the Trilateral Commission, the American Bar Association, and FEMA). Aside from his primary duty Brown stockpiled 18 months’ worth of food, weapons and ammunition, believing there would be a Federal government takeover of “private property, utilities, health facilities and the media,” in the near fugure. The militia was setting up its own “courts… for the purpose of taking back America,” and Brown saw no way the conflict would end except in violence – an attitude that has a tendency to be self-fulfilling.

After going into hiding, Elaine claimed that “[t]he only law book we now recognize is the Bible. The only way we're coming out of our home is either as free man and free woman or in body bags,” alleging that they were not US citizens, were non-residents for tax purposes, that their compound was not in the US but in the Kingdom of Heaven, and – just to be sure – also that the New Hampshire business tax laws were incorrect, null and void, that the Feds have no jurisdiction in New Hampshire, that labor could not be taxed, and that the law enforcement officials surrounding his properties were part of a “Zionist, Illuminati, Freemason movement,” who were “now attacking the Creator himself or itself, … You kill them. That is exactly what the Ten Commandments tell you to do.” But as Ed emphasized “We're not conspiracy theorists, we deal with conspiracy facts. Freemasonry and Judaism – that is the truth.” More here.

The Ed Brown featured here is presumably not the same Ed Brown, but will most likely run into trouble with the law sometime soon as well.

Diagnosis: The world would be a less interesting place without people like Ed and Elaine Brown. They are probably not entirely unlikely to cause some harm to themselves and others, however.
Posted by G.D. at 12:32 PM