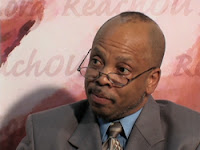 Clenard H. Childress is a New Jersey minister, and founder and board member of several organizations devoted to religious fanaticism, anti-abortionism (e.g. the Genocide Awareness Project), and virulent anti-homosexuality. He is, for instance, the founder of the website blackgenocide.org devoted to the idea that making abortion legal was a step in an attempted genocide of black people (a good exposé on that idea can be found here).

At least he perceives something good about Obama’s presidency; according to Childress: “The good thing about an Obama presidency is that we now have a face to put on the genocide of African-American babies in this country.” Yes, the argument is a little unclear (more here), but at least “Barack Obama is serving as a front-man for a racist Planned Parenthood strategy to destroy African Americans”, which is good to know, I guess. The reason people voted Obama back for a second term, however, was so that we could “feel better about ourselves and get the guilt of racism off us,” which Childress finds scary since Obama is “very deep into an ideology that is not American.”

As an anti-gay crusader, Childress is refreshingly straightforward, not bothering to pack his points into factual distortions, word salads, or quote mining. He just makes up whatever he needs. So for instance, in a rant concerned with the sinfulness of homosexuality he blithely points out that “Jesus said prophetically that in the last days the homosexual community will demand their lifestyle be accepted as a right in society. And now we are even seeing homosexuality bandied about as a ‘Civil Right’ that should be guaranteed under the Constitution similar to some of the rights being sought through the modern ‘Civil Rights Movement’.” He does, understandably, not give us chapter and verse for the prophecy. But it is at least clear that gay equality is at the very least a sign of the end times. Childress has, for instance, compared gay equality supporters to the people in the Bible who called for Jesus’s death, and stalwartly claimed that the American Psychological Association believes that homosexuality is a choice, which is another demonstrable instance of Childress’s above-mentioned argumentative strategy.

Diagnosis: Astoundingly maniacal loon whose hold on reality is such that one suspects that he actually thinks he is sometimes telling the truth and making a coherent point.
Posted by G.D. at 1:48 PM