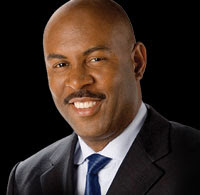 Keith Butler is the founding pastor of the megachurch Word of Faith International Christian Center Church, Detroit, former city councilman, author, board member of Christians United for Israel (Hagee’s organization), and GOP activist who in 2006 he lost the nomination for U.S. Senate (he said that God handpicked him to clear out Democrats, since the latter are “on the wrong side of Judeo-Christian issues.”) More on his background here.

The core of Word of Faith theology is the notion that faith is actually a power that believers can wield to accomplish things by declaring that power verbally. In other words, it is the Christian fundamentalist version of The Secret and the Law of Attraction, and – you guessed it – the very foundation for the prosperity gospel. Butler is, accordingly,an extremely rich fanatic, and according to one Word of Faith preacher: “He is trying to get you out of this malaise of thinking that Jesus and his disciples were poor ... the Bible says that he has left us an example that we should follow. His steps. That's the reason why I drive a Rolls Royce. I'm following Jesus's steps.” Butler’s particular version of the name it and claim it game is discussed here.

He is also virulently anti-gay: “the gay lifestyle is based on a behavior choice that endangers family, children, and the core of society … The attempt to push this decadent lifestyle into mainstream society … is simply wrong,” though I am not sure Butler is really entitled to accuse other groups of a “decadent lifestyle.”

Diagnosis: Insofar as he is not just a corrupt fraud, Butler and his followers are just as crazy as anyone who thinks The Secret has anything going for it. Augmenting new age drivel with the Bible does hardly make it any more respectable.
Posted by G.D. at 12:39 PM