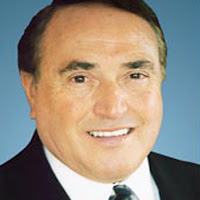 Morris Cerullo is a Pentecostal Christian evangelist and a faith healer of the good old kind. He encourages people with serious illnesses and disabilities to attend his revival meetings so Jesus can heal them (and he can receive well-deserved financial compensation for letting the sick access his Jesus), and uses posters of people leaving wheelchairs and crutches to promote his efforts.

Cerullo was an early champion of the Satanism scare, to the extent that he put up a traveling exhibit dubbed the ”Witchmobile,” in which horrified spectators and frightened children would see on display various occult artifacts used for Satanic rituals, such as astrology items, Ouija boards, and Tarot cards, in order to recognize and combat these nefarious enemies in their ordinary lives. As late as 1999 Cerullo ran an ad in the UK, claiming that ”Satanic hordes” occupy ”principal palaces of power in Europe” (and that homosexuality is an abomination). The campaign was not an unqualified success, particularly since Cerullo’s faith healing campaigns in the UK had previously left a trail of death. Cerullo was subsequently challenged to produce his three best examples of claimed miraculous healings for scrutiny by a panel of doctors. They were not particularly impressed. Cerullo has also been expelled from India after his inability to actually heal people caused a riot (30 000 people apparently showed up to Cerullo’s event, including several disabled people, and Cerullo rather audaciously just declared that they had all been healed, something many of them rather obviously felt was inaccurate).

His evangelical campaigns targeted at the Jewish community have been met with some criticisms as well (Rev Dr Chris Wright, principal of All Nations Christian College, denounced Cerullo's methods as ”spiritually perverted and pastorally disastrous”).

He may be most famous, however, for his stint as an amusement park owner, having got his hands on the PTL Club and Heritage USA amusement park that Jerry Falwell appropriated from Jim Bakker after the latter’s fall from grace. He later lost the park but retained the PTL television network (currently named ”Inspiration” and run by his son David).

Diagnosis: Raving mad, of course, and sufficiently insane to jeopardize his own influence. That, of course, doesn’t scare away the most gullible of the gullible, and he still seems to enjoy a modicum of influence.
Posted by G.D. at 12:07 PM