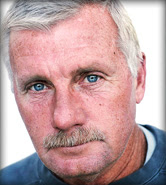 Following up on last post’s topic of presenting fictional books as factual stories, here’s Tom Brown, author of a number of books with titles like The Vision, The Way of the Scout, and so on. In these books, obviously closely based on a series of novels by Ernest Thompson Seton from the early 1900s, he tells a story of a boy in New Jersey who came under the tutelage of an old Apache tracker. The latter taught him wilderness tracking, plenty of supernatural woo such as how to make himself invisible, walk through walls, go on shamanic journeys, permanently frostbite-proof themselves, change shape, magically escape from a pack of wild dogs who think they are wolves, trick his parents into thinking he was at home doing homework when in fact he was spending weeks at a time in the New Jersey pine barrens, and so on. Nothing wrong with such stories, except that Brown tries to pass them off as autobiographical – and they are indeed marketed as such in New Age bookstores (hat tip)

Brown does run a tracking school (with plenty of woo), but is in fact most likely self-taught. He was nevertheless technical advisor for the movie The Hunted, and has been featured on Penn & Teller, who were not particularly impressed.

Tom Brown jr. is probably not related to the exorcist Tom Brown, who brags about having used his exorcism skills to help El Paso repeal Same Sex Partner and Domestic Partner benefits, and who works with Bob Larson (who will be covered in a later, separate entry).

Diagnosis: Woo. Some commentators have also suspected fraud, for very obvious reasons. As opposed to most people covered here it is less obvious that Brown is anything but rather harmless (despite his popularity) – at least as opposed to his exorcist namesake.
Posted by G.D. at 12:26 PM