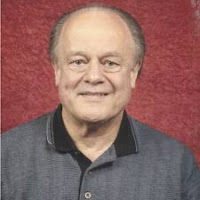 Rod Butterworth runs the Creation Museum of the Ozarks in Branson, Missouri, one of several such “museums” in the US constructed around the premise that The Flintstones is a documentary to offer tacky displays of plastic dinosaurs living together with humans as evidence for a young earth and against evolution (no, they don’t quite get the distinction between evidence and imagination, but according Butterworth “evolution teaches that there is no God, and everything evolved by lucky chance  over millions of years,” which doesn’t much resemble the theory of evolution).

The museum was founded by Butterworth, who is originally British (it seems like the US are attracting a plethora of raving Commonwealth morons – Ken Ham and Ray Comfort being obvious others in that group), as a response to his concern that most “dinosaur museums” around were completely “evolutionary in nature”. Their mantra is the same as the more famous Kentucky museum’s, namely the interestingly post-modernist “same evidence, different views” (+presuppositionalism). Again, the mantra should be interpreted keeping in mind that these guys wouldn’t be able to distinguish evidence from wishful thinking if their lives depended on it – which is of course how they are able to present “evidence” that “evolutionists” have overlooked, such as Ica stones, the London artifact, polystrate fossils, chameleon art, a variety of fallacies, and claims strikingly reminiscent of “the Loch Ness monster disproves evolution” (which made it into the curriculum at certain Louisiana private schools) – rivers run south from Missouri, just sayin’), fire-breathing dinosaurs (hence dragons, therefore Jesus QED), a Paluxy footprint with the comment that “yes, most of these have shown to be fake, but this particular one looks like the real thing,” but which really is the very same as one previously offered  by Carl Baugh). You can read a detailed (hilarious) report on a visit to the “museum” here. You can see Butterworth trying to defend the perfect benevolence of the God of the Old Testament here.

The museum’s vice president, Barry Dullum, claims that he used to be an evolutionist, but then someone told him that there has really been a Great Flood and a great hoax played upon Western Civilization by the Humanists, and that made him open his eyes. I’m not sure I believe him.

Diagnosis: A magnificent display of sheer idiocy, ignorance and dishonesty, Butterworth and his museum makes Casey Luskin look well-informed by comparison, and that takes some deep stupid. Moderately dangerous, since they, as all creationists, are targeting the children instead of even attempting to actually apply critical thinking or look for evidence.
Posted by G.D. at 12:52 PM