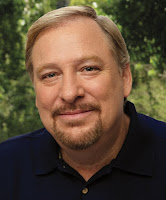 Rick Warren should be well-known to most readers, but to recap: He is one of the most influential televangelists in the world and a pastor of an enormous megachurch, the Saddleback Church. Warren is an avid anti-gay crank (of the “homosexuality-is-the-same-as-pedophilia-and-rape” type) wingnut, and unrepentant liar, and also the author of the numbly superficial vapid piece of waffly trite “The Purpose-Driven Life” (following “The Purpose-Driven Church” which does, contrary to what some think, not contain the remotest trace of serious theology, but lots of marketing ploys). Now, Warren has indeed done some good things, and he may presumably be counted as an ally in the fight against global warming, for instance, but that doesn’t overshadow his rank lunacy. Warren is an outspoken creationist, and has taken less than civilized – and certainly less than informed – views of matters related to science, and for that matter to ethics. He called Michael Schiavo’s decision to remove Terri Schiavo’s feeding tube “an atrocity worthy of Nazism”, for instance, and went on to speculate that Michael Schiavo wanted Terri to die because, if she regained consciousness, she might have “something to say that he didn‘t want said.” So Rick is in other words not a very nice person. He did get a big CV hit when Obama invited Warren to deliver the invocation at his 2009 inauguration, however.

Warren on creationism? “The Bible's picture is that dinosaurs and man lived together on the earth, an earth that was filled with vegetation and beauty ... man and dinosaurs lived at the same time ... From the very beginning of creation, God gave man dominion over all that was made, even over the dinosaurs” (though he doesn’t cite the Bible’s extensive paragraphs on the Tyrannosaurus). Pure doltheadery. And of course, Warren is quick to blame unethical acts on the teaching of evolution, since the scientific theory of evolution is rather obviously intended to be a system of values.

He also has some obvious connections to the draconian Ugandan anti-gay law, and refused to condemn the law when it originally passed in 2009 : “As a pastor, my job is to encourage, to support. I never take sides.” Right. More here.

For some absolutely unhinged ignorance and bigotry, you can go here.

Diagnosis: Clown, like Pennywise from “IT”, but far more dangerous. Malicious, sadistic, hateful bigot whose sheer vileness is matched only by his ignorance and hatred of rationality, science and reason.
Posted by G.D. at 12:58 PM