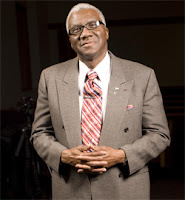 Rev. Levon Yuille is an associate of Ellis Washington’s, and to justify his inclusion we could really have stopped right there. Yuille, however, is furthermore an ardent TeaPartier, National Director of the National Black Pro-Life Congress, and pastor of The Bible Church in Ypsilanti, Michigan, who rose to fame through his participation as a plaintiff (together with Gary Glenn, president of the American Family Association – Michigan; René B. Ouellette, pastor of the First Baptist Church in Bridgeport, Michigan; and James Combs, pastor of four different churches in the state) in a federallawsuit claiming that the Matthew Shepard and James Byrd, Jr. Hate Crimes Prevention Act, passed in 2009, violated their religious freedom and freedom of speech rights. Not that he could claim actual harm; instead, the plaintiffs claimed “hypothetical injury”. The judge was not amused, and the case was dismissed. Full proceedings here.

In fact, Yuille told OneNewsNow that he opposes hate crimes protections for gays because he finds it “demeaning [to] the black community” and that he was taking a stand for truth [?], believing he is doing what is right from a biblical, social, and health perspective.

He also spoke out against several Michigan churches thatcelebrated Darwin Day, saying that: “I don't understand why Christians would celebrate his birthday when it is contradictory to the Christian position, the creationist view.”