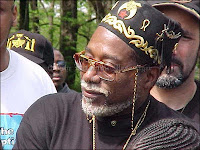 Dwight York is an American author, black supremacist leader, musician, and convicted child molester. He has founded a number of fraternal orders and black nationalist groups, usually referred to as Nuwaubians. His groups came under government scrutiny in the 1990s after the constructionof Tama-Re, an ancient Egyptian-themed “city” (complete with pyramids, temples, and living quarters for his followers) in Putnam County, Georgia.

York’s real background has been difficult to ascertain, since he is a rather notorious liar and doesn’t really even try to keep his stories straight. York claims to be a descendant of “Ben” York, but also to have been born in Sudan to a Sudanese father, as well as a descendant of various important Egyptians and American natives. No, it doesn’t add up, and York has created quite an elaborate and inconsistent genealogy forhimself (particularly interesting are his claims that the Nuwaubian Moors are descendants of the Olmecs via Egypt over an ancient land bridge to Georgia to justify his purported lineage, and that he is also an extraterrestrial from the planet “Rizq” in the galaxy “Illyuwn”), and was convicted in 1988 for obtaining a passport with a false birth certificate. You could sort of see that one coming).

In any case, in the 60s York combined elements of the Moorish Science Temple of America, the Nation of Islam, the Nation of Gods and Earths and Freemasonry, and invented a quasi-Muslim black nationalist movement, called “Ansaar Pure Sufi,” set up to be a Western cell of the Sudanese Ansar movement but in reality a front for a wide range of criminal activities, including arson, welfare fraud and extortion. His group has later taken on a wide range of names.

His teachings are rather complicated, slippery and incoherent, as it attempts to synthesize as many borrowings from existing practices as possible. Thus, you get a baroque cosmology, unconventional theories about race and human origins, cryptozoology, Hoagland-like UFO stuff, black nationalism, conspiracy theories, and religious practices invented or borrowed from any existing religion. A mainstay, however, is the idea that Black people are Nubians, “the original seed” and the “original Egyptians,” whereas White people are descended from the biblical Canaanites and affected by a genetic defect: one of Noah's sons, Ham, was frightened so badly that “it affected his genes and it came out in his fourth son, Canaan.” Genetics doesn’t quite work that way, of course, but that’s a different matter.

Among their other teachings:
- The Motherplane/NIBIRU would launch the Crystal City or New Jerusalem to our solar system from its position in Orion to pick up the Chosen. This commenced in 2003. The Chosen Few will be groomed for 1000 years and returned to Earth for the final battle against the Luciferians
- In 1952, grotesque extraterrestrial Andromedeans that resembled the Predator met with and frightened U.S. President Harry S. Truman.
- Saturn is not really a planet, but a gaseous ball adjacent to the actual planet, Titan, which is erroneously considered to be one of Saturn’s moons. The head and hat of Santa Claus are symbolic representations of Saturn, Titan, and Saturn’s ring.
- Thomas Paine plagiarized the U.S. Constitution from the unwritten Constitution of the Iroquois.
- The Pyramids of Egypt are, among other things, electromagnetic antennas that create standing columnar waves of tachyon energy to prevent the wobbling of the Earth.
- The Koran is a product of Jewish scholars and the Catholic Church’s branch of the Jesuit priests under Pope Augustine (yes, read it again, please).
- “[A]ll courtrooms in America today are commercial marketplaces dealing in matters bearing exclusively upon a private, commercial script known as Federal Reserve Notes. Today’s courtrooms are impersonal businesses under jurisdiction of a foreign, occupying, military power and managed from the bench (from the Italian banca:bank) by merchant bankers called ‘judges’ and ‘magistrates’ who enforce private, copyrighted, corporate policy (known as code) wholly owned by British corporations.”
- The Earth is hollow and contains cities populated by different species of people, such as the Deros, the Teros, the Flugelrods (google them!), the Duwanis, the Dunakial, and the Anunnaqi.

York was arrested in May 2002, and convicted for carrying minors across state lines to sexually molest them, racketeering, as well as for financial reporting charges. He tried to get off by claiming that his group is a sovereign people not subject to American laws (“I cannot get a fair trial, Your Honor, if I’m being tried by the settlers or the confederates. I have to be tried by Native Americans as a Native American. That's my inalienable rights”), and later that he had diplomatic immunity, first as a sovereign aboriginal Moor, then as aLiberian consul. His lawyer, on the other hand, tried to get him dismissed as dingbat insane. York has later come to terms with the fact that his betrayal, arrest, trial and imprisonment (and eventual release) were foretold in chapter 10 of ZechariaSitchin’s “The Wars of the Gods and the Men”, with York being represented by Mar-duq in that story.

Of course, his followers and supporters claimed it was all conspiracy, claiming among other things that the Malachi Z. York who was charged and convicted is not the same person as the Dwight D. York who is listed in court documents as the defendant, or that York was set up by his son Jacob in coordination with al Qaeda-linked American mosques jealous of York’s influence among black Muslims. The, uh, somewhat-critical-of-certain-specified-groups-of-people Malik Zulu Shabazz of the New Black Panther Party claimed that York "is a great leader of our people and is a victim of an open conspiracy by our enemy” (i.e. the Jews).

Diagnosis: Fully unable to distinguish reality from fantasy, York’s group was surprisingly influential in the 90s. York himself is currently serving a 100+ sentence, but his group still exists – and there are far too many groups like it.
Posted by G.D. at 2:14 PM