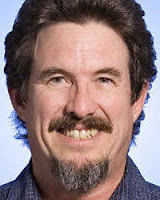 Jerry Bergman-sycophant Kevin “Ben Stein is Rosa Parks” Wirth is your standard creatard. He is, among other things, the leader of the Access Research Network (a sort of poor man’s Discovery Institute) and author of “Slaughter of the Dissidents: The Shocking Truth about Killing the Careers of Darwin Doubters”, which takes it for granted that creationism is true and suffers from aconspiracy among those darned college atheist liberals. In fact, Wirth claims, the execrable piece of drivel Expelled  only exposed the tip of the iceberg, and he provides several other stories concerning good Christians who got their careers ruined for not toting the party line. For instance Jerry Bergman, who in in real life was fired for lyingabout his credentials. Wirth is known for calling these alleged career killings “hate crimes”, and also for calling any denounciations of his rambling idiocy “hate speech”. No, Kevin, it isn’t.

He is also an AIDS denialist.

Diagnosis: Standard creotard noodleheead who assumes that a sufficiently elaborate conspiracy theory is a fair substitute for scientific results. Probably without significant impact.

For an interesting new argument for creationism you can savor this one from Rocky Ramsey.
Posted by G.D. at 3:15 PM