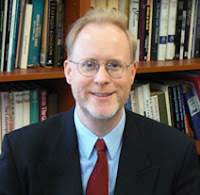 Meanwhile, back at the DiscoTute John G. West enjoys his position as a Senior Fellow and Associate Director and Vice President for Public Policy and Legal Affairs of its Center for Science and Culture. Indeed, West has been co-director of the Center since it was launched. At a 1995 DI-sponsored conference, “Death of Materialism”, West delivered the address “The Death of Materialism and the Renewal of Culture”, an early version of the Institute's Wedge Strategy – the Wedge Document even copied and pasted West’s opening paragraphs. As most ID creationists, West has argued vehemently that Intelligent Design is a scientific theory. His primary premise is the assertion that it is, indeed, a scientific theory. So it follows if you accept the premise.

West’s favored gambit is “concern” over the alleged suppression of truth by the other side by vicious atheists, and he cries a little bit every time activist judges decide that religious indoctrination has no place in public schools. Especially, of course, if you think about Galileo. It’s pure conspiracy theory, of course, but it does predict West’s views on global warming, a topic about which the “alarmists” are just as dogmatic as Darwinists are about evolution because they recognize that West is wrong and possesses no expertise in the fields in question.

West is also the author of (among other things) “Darwin Day in America” where he seeks to establish a link between the theory of evolution and the eugenics movement (never mind the irrelevancy of this connection to the truth or not of evolution). People who actually know something about anything weren’t convinced. He also tried to link Anders Breivik to Darwinism; his claims are rather convincingly refuted here. I’ll let readers decide on his book “Celebrating Middle-Earth: The Lord of the Rings As a Defense of Western Civilization”.

Diagnosis: Less than ideally honest chucklehead, and a prime case of every strand of cognitive bias channeled into a single-minded force of rage against reality. West should not be underestimated, however, as he has made serious contribution to undermining science and education.
Posted by G.D. at 12:01 PM