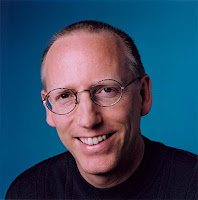 Note: Adams has clarified his views in the comment section, and I'll accept those at face value. The entry should thus be read in light of those clarifications (most importantly, he rejects the ID allegations and affirms support for evolution, pointing out that he was making claims to the effect our understanding of evolution will most likely change in the future). Given those comments and clarifications, Adams does not qualify as a loon I'll let the post stand as it is, so that readers can appreciate the gist of Adams's clarifications - but also because Adams "clarifications" strike me as backpedalling more than clarifying.

But our mission is document actual loons. Even if the comment is a matter of backpedalling, it does affirm that Adams accepts evolution, and given that he does, Adams does not appear to qualify as a loon.

Another cartoonist. Scott Adams is the famous creator of Dilbert, as well as several non-fiction works. He has also garnered some attention for his men’s right rants (he even supported Rush Limbaugh on the Sandra Fluke affair) and his use of sockpuppets to attempt to bolsterhis case and to declare himself a genius.

A case of poor judgment, perhaps. But Adams has also advocated Intelligent Design creationism (though when pressed he backed down to the “teach both sides” canard), motivated by arguments such as the following, hysterically question-begging argument for the existence of God: “[s]omething is intelligent if it unambiguously performs tasks that require intelligence. Writing Moby Dick required intelligence. The Big Bang wrote Moby Dick. Therefore, the Big Bang is intelligent, and you and I are created by that same intelligence. Therefore, we are created by an intelligent entity.” Uh, ok. A fine commentary can be found here. And then there is the following argument against atheism: “In order to be certain that God doesn't exist, you have to possess a godlike mental capacity – the ability to be 100% certain. A human can't be 100% certain about anything. Our brains aren't that reliable. Therefore, to be a true atheist, you have to believe you are the very thing that you argue doesn't exist: God.” Therefore, God exists. The arguments put some of the puns in Dilbert in a new light, don’t they?

Well, according to himself he doesn’t “believe in Intelligent Design or Creationism or invisible friends of any sort. I just think that evolution looks like a blend of science and bullshit, and have predicted for years that it would be revised in scientific terms in my lifetime.” Be that as it may. Adams is a loon for the appalling denialist attitude spurred by his own sense of ego: “I've been trying for years to reconcile my usually-excellent bullshit filter with the idea that evolution is considered a scientific fact. Why does a well-established scientific fact set off my usually-excellent bullshit filter like a five-alarm fire? It's the fossil record that has been bugging me the most.” His lack of background for and knowledge of biology is no hindrance, of course. If science contradicts Adams’s guts, then science will have to go.

This one is certainly meant as a jest, but reveals a pretty shallow understanding in the process.

Diagnosis: Sorry. When you reject science on the basis of your own self-projection as a genius and the fact that science (which you don’t understand) doesn’t quite suit your gut feelings, then you’re a loon. End of story.
Posted by G.D. at 1:12 PM