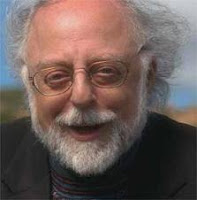 A.k.a. Captain Quantum
A.k.a. Dr. Quantum

Fred Alan Wolf used to be a theoretical physicist specializing in quantum physics, is a former physics professor at San Diego State University, and has helped popularize science on the Discovery Channel. He is also a first-rate crackpot (with credentials) and has written extensively on the relationship between physics and consciousness (“The Dreaming Universe”, “Mind into Matter”, “The Yoga of Time Travel”, etc (no, they’re not peer reviewed), and the pseudo-documentary “Shamanic Physics”). Philosophers of Mind do that as well, of course, but Wolf isn’t in that camp – he has no expertise in the area, and just as so many other hacks, he is fond of reifications and category mistakes. A typical example is his claim that the laws of physics are created by us, which is, in one sense, true insofar as we described them in human language and applied our arbitrary units of measurement … can you guess the point at which Wolf gleefully lapses into equivocation? (Hint: the fact that our sentences are built up of words the meaning of which is determined by convention, does not suggest that the phenomena we describe with those sentences are determined by convention.) In general Wolf likes to claim that ancient eastern mysticism and quantum physics are two sides of the same coin (shades of Capra) and that this provides a real explanation of consciousness (a rather illuminating point about where people like Wolf comes from is provided here). To put it simply: if consciousness (e.g. how to account for the phenomenon of subjective points of view) was a mystery to begin with, then shouting “quantum and Buddhism” does not count as an explanation of that mystery any more than shouting “mysterious spiritual souls” or "have no idea" would count as an explanation (though the last option would at least be rational and reasonable).

I suppose Wolf’s stance may be summed up by his enthusiastic appearance in the Ramtha production "What the BLEEP Do We Know?" and “The Secret”.

Now, Wolf does have a certain understanding of physics, and his fluffery is usually founded on a kernel of truth (such as this). Indeed, as opposed to most quantum woo promoters, Wolf knows his quantum physics. His problem is that he doesn’t have the faintest clue about anything else, least of all the phenomena he thinks quantum physics can explain.

Diagnosis: Fluffbot. Very productive and probably rather influential, unfortunately.
Posted by G.D. at 11:53 AM