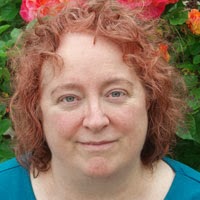 Marina Michaels is a “psychic, a conscious channeler, a medium”, blogger and “natural healer” (meaning that “people can just be around me, and they will receive healing energies”), who is, apparently, “very close to Jesus and Mary.” She is also an intuitive: “I can look at people (even in photographs) and just know what they are about,” which the rest of us would suspect is somewhat self-fulfilling (prejudice and a good does of confirmation bias do the rest). Michaels runs the website thelighthouseonline.com, and it is at least so full of pastel love and fluffy friendliness that it is almost worth a visit (at least she used to run it – might look like she has left it behind).

She is primarily known (if at all) for her musings on the Osireion, which in Michaels’s mind is obviously related to Atlantis (for more info on the Atlantis-Osireion connection, here’s Gary Fletcher). Despite complete scholarly consensus that construction of monumental stone architecture in Egypt did not occur before the early 3rd millennium BCE, Michaels immediately intuited that the structure was much older and connected to something that patently never existed – according to geologists, according to Michaels (but not actually according to geologists), the structure is at least 18000 years old. It isn’t, but such are the faith-based ways of New Age cargo-cult research. Damned be the use of evidence if fluffy ramblings give you spiritual answers much closer to your heart.

Though she admits to not knowing a lot “about the rise of that early human civilization – I have neither seen it psychically, nor have I read anything that rang true. Rudolph Steiner wrote of it in his book called The Submerged Continents of Atlantis and Lemuria: their History and Civilization, being chapters from the Akashic Records (published in 1911 by the Theosophical Society), but although I have read it, much of it did not ring as truth on the physical plane” (what a glittering example of critical thinking!), Michaels nevertheless provides lengthy treatments on the origin and location of Atlantis. Her evidence is – she admits herself – psychic intuition, or “imagination,” as it is more usually called. She also knows why and how it went under, and what we can learn from it: “the point of the destruction of Atlantis” was “to give all souls on earth a chance to evolve as spiritual beings so that they will be ready to advance to the next level of spiritual freedom.” Not even Yoda could have figured out that one (except, maybe, in the Prequels).

Diagnosis: The plush and pillow version of religious fanaticism; what Jerry Falwell would have been like if his mind had been filled with love and furry animals. Reality is still far, far away.
Posted by G.D. at 1:51 PM