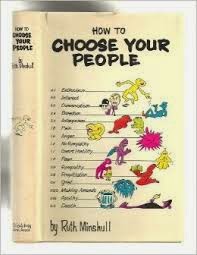 Ruth Minshull apparently started off as a writer of scientology books, though her books seem to have been taken off the scientology approved literature list sometime in the 1980s. Some say it was because the books represented dissenting opinions. The fact that Minshull is currently promoted primarily by whale.to suggests that her rants might have been a little too batshit even for scientology – and because she “realized” that Ron Hubbard “used to work in the CIA mind control department,” though that realization seems to have come to her only after she had been kicked out. You can read her 1972 book How To Choose Your People here, which expanded upon Hubbard’s views on sexuality and is essentially an anti-gay screed.

It is in fact a bit hard to discern exactly what she is claiming, but it evidently has something to do with “levels of consciousness”, as represented by the emotional tone scale of scientology, though Minshull does claim that scientology is entirely untrustworthy on the matter. It may also have something to do with how “The Monarch victims of today are the tail end of centuries of efforts by the Kaballists, Freemasons, and the Illuminati adepts to completely control other human beings,” but that quote may or may not attempt to illuminate independent matters (the unusual grammar doesn’t add to clarity).

To sample her positions (capitalization removed): “The spiritual foundation for programming laid by the programmers are the generational spirits which are laid in the womb & introduced to the child when verbal as the child’s ‘friend’ & ‘spirit guide’. A clan’s guiding spirit is also called a totem. The keepers or guardians protect the spirits within an illuminati system. There will be one alter which knows all the demons which have been layered in. From the age of five, the child’s cult parts will be taught the genealogical histories of their spirit guides. At the age of 12, some candidates for Amer. tribal chiefs had to wait in the wild for their totem to guide them. They must remain in the forest until their guiding spirit appears. This is why the illuminati study the Xibalian mysteries written in the Popol Vuh.” And so it goes. There appears to be … things going on there.

She has also written on how “[s]ugar is a favourite poison to destabilize a nation” in a piece titled “The Deliberate Use of Refined Sugar to Assist Degenerative Disease”. At least the latter article is sufficiently grammatical to contain items that qualify as claims. The idea that claims should be backed up by reason and evidence would have been the next level, but Minshull doesn’t seem to be planning on going there quite yet.

Diagnosis: Crazy old lady. Really. Doesn’t seem to have very much influence, and her idiosyncratic approach to grammar doesn’t really raise the probability that she’ll ever get any.
Posted by G.D. at 1:10 PM