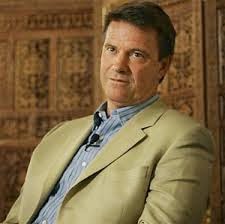 John Morton, current spiritual director of the New Age group John-Roger’s Movement for Spiritual Inner Awareness (MSIA) (in fact, Roger Delano Hinkins – John-Roger himself – is still kicking around, but we missed him). MSIA is a “nondenominational and ecumenical church,” the stated purpose of which is to “teach Soul Transcendence, which is becoming aware of yourself as a Soul and as one with God, not as a theory, but as a living reality,” and which appears to be a classic cult. The overall idea is really a matter of trying to combine the Bible (and various Eastern religions) with classical self-help techniques and woo, including various spiritual exercises and transcendental meditation. You can also subscribe to something called Soul Awareness Discourses, which are opportunities “for individuals to connect inwardly with their own Divinity, each according to their desire and intention.”

Morton, the current spiritual teacher, who regularly presents himself as “Doctor of Spiritual Science (D.S.S.)”, is the author of The Blessings Already Are and You are the Blessings, which are among the most astoundingly vapid pieces of text ever collected, and are marketed through slogans such as “Charge yourself with Spirit. Infuse yourself with Spirit. Live Spirit’s way. That is the way that goes through the Sound of God, the name of God, the word of God. It is openly offered to you. It is freely given. Are you freely choosing?” Well, you can’t test a metaphor, and it really is anyone’s guess how Morton interprets data as evidence for the claim.

The passage also gives you the main reason for why Morton is included in this Encyclopdia. His writings have made sheer vacuity into an artform, and Morton is among the most striking examples of bullshitters who have mastered the art of making vapid inanities sound profound to the weak of mind. That he is also the director of a cult doesn’t hurt. In fact, he is also the spiritual director of Insight, one of John-Roger’s other groups. Two cults.

Morton is also an occasional writer for Huffington Post, probably in part because Arianna Huffington herself is a longtime follower of John-Roger’s MSIA.

Diagnosis: Oh, the fluff! People who produce bullshit like Morton deserves exposure. In addition there is a distinct layer of evil, or at least cynicism, underneath the whole snowflaky edifice.
Posted by G.D. at 10:51 AM