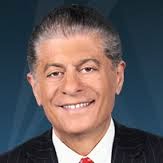 Sorry, we have to include him. Andrew Napolitano is a former Judge of the New Jersey Superior Court and current libertarian pundit on Fox Business Network. The reason one might be reluctant to include him, is that he often says intelligent stuff (especially on civil liberties). Unfortunately, he is also a conspiracy theorist and anti-Fed crank, gold standard idiot and 9/11 truther. Then there are things such as his comparison between Syria’s use of chemical weapons and “president Clinton’s murder of the Branch Davidians.” Or his attempt to claim that the Contraception Mandate forces everyone to pay for euthanasia.

Diagnosis: It’s a bit sad. Napolitano once had the power to be a voice of reason at Fox. But he failed. This is failure.
Posted by G.D. at 10:18 AM