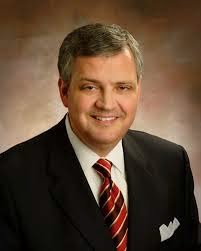 Albert Mohler is a theologian, deranged madman, and president of Southern Baptist Theological Seminary in Louisville, Kentucky. He clearly tries to present himself as compassionate and caring, but his odious personality, bigotry, and raging hatred fueled by religious fanaticism usually gets the better of him pretty quickly. On his website you can read his almost daily round-up of of issues of concern for good conservative Christians, under the heading “The Briefing”, and there is an interesting biographical sketch here.

Though rabidly anti-gay Mohler has, in fact, admitted defeat on the issue of gay marriage. Of course, to Mohler that defeat is proof positive that rightwing Christians are at present the victims of a new McCarthyism, since “persecution” to Mohler means “whenever Al Mohler doesn’t get his will”. Accordingly, according to Mohler, “same-sex marriage is going to be the greatest challenge to religious liberty in our lifetimes”. He has suggested, however, and as opposed to most of his fellow fundies, that there may well be a biological origin for homosexuality. For Mohler, however, that means that it might be possible to “cure” teh gayz while the fetus is still in utero. His defense of the claim is … pretty breathtaking. More Mohler on homosexuality here.

According to Mohler, Buddhism, Hinduism, Islam and Marxism are “demonstration[s] of satanic power.” He is nevertheless confounded by the question “Why is the Muslim World So Resistant to the Gospel?”, especially when given in his own, delectable, delusionally insane and hateful view of the Gospel. “Because they have their own religion,” is not an answer that carries much weight with him. Mohler has earlier shown that he thinks “believer” is synonymous with “evangelical”, which may be a barrier in trying to understand other religions.

God hates yoga as well, apparently (“When Christians practice yoga, they must either deny the reality of what yoga represents or fail to see the contradictions between their Christian commitments and their embrace of yoga”). Here is Marsha West of the AFA defending Mohler’s condemnation of Christians who practice yoga. Apparently God also hates Haiti, His (his) reasons being precisely as lucid as His (his) reasons for hating yoga.

Of course, Mohler is a hardcore Young Earth creationist. He does admit that the Earth looks very old, but hey – the power of God and so on . In short, Mohler concedes the evidence to his opponents and adopts the Omphalos hypothesis, unperturbed by the fact that the Omphalos hypothesis makes God a deceiver, and is in any case a stronger argument for the Matrix providing an accurate description of the Earth than for young Earth creationism. Mohler is a staunch critic of Christian scientists who would make compromises with a literal interpretation of the Bible (e.g. here), though his criticisms are, rather obviously, from a fundamentalist presuppositionalist point of view that really shouldn’t carry any weight to anyone with the dimmest appreciation for reason; indeed, his main argument against evolution is quite simply that it is inconsistent with a literal reading of the Bible; truth, evidence and reality be damned. Being somewhat dimly aware that the argument may just make him irrelevant with those who disagree with him, Mohler has claimed that there is independent evidence for the unsustainability of evolution. As evidence, he cites Chris Mooney arguing that Intelligent Design is not science because supernatural explanations fall outside the scope of science, Ken Miller arguing that Intelligent Design is wrong, and Evan Ratliff on how to combat the attempts of creationists to get Intelligent Design into classrooms. From these three, Mohler concludes that “The house of evolution is falling. Its various theorists are increasingly at war with each other over the basic question of how evolution is supposed to work, and its materialistic and naturalistic foundation is becoming increasingly clear.” Yes. Read it again. The fact that evolutionists disagree is evidence that the theory of evolution is wrong, even when what they disagree over is how to deal with creationists. “The evolutionists tenaciously hold to their theory on the basis of faith and as an axiom of their worldview,” and the disagreement “indicates that proponents of evolution see the Intelligent Design movement as a real threat. They are right.” That’s the argument. “Series of claims” may be a more apt characterization. “Lunatic ravings of a deranged madman,” apter still. He also lies, and does so blatantly. After all, he is the President of the Southern Baptist Theological Seminary. That’s just beneath Jesus himself. Clearly that gives him some license to circumvent the Commandments, kinda like a God’s own James Bond.

As most denialists Mohler nevertheless tries to convince us that he really likes science. “Are science and Christianity friends? The answer to that is an emphatic yes, for any true science will be perfectly compatible with the truths we know by God’s revelation. But this science is not naturalistic, while modern science usually is.” A more honest and accurate answer is “no”.

Diagnosis: A key leader in the fundamentalist community, Mohler is immensely influential. But as opposed to people like, say, Bryan Fischer, Mohler actually has a huge audience among, uh, mainstream fundies, despite the ridiculous stupidity and repugnant, childish barbarism of his views.
Posted by G.D. at 11:49 AM